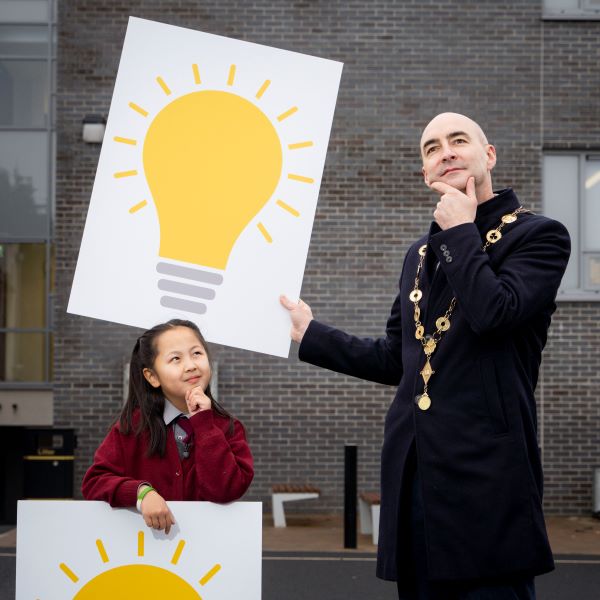 A suggestion by a nine-year-year-old Limerick schoolgirl has prompted the Mayor to create a special Ideas Box for children.

During Culture Night, Olivia Chan, who is in third class in St Paul’s National School in Dooradoyle took part in Children’s Speaker’s Corner, during which she proposed there should be a suggestion box open so that the children of Limerick could post their ideas or suggestions, which they feel will make a better Limerick for all.

Mayor Daniel Butler met with Olivia and is now delighted to announce that an Ideas Box, specifically for primary school children has been opened.

The Ideas Box will be online via the Council’s online portal MyPoint and will be open for the month of March.

The Mayor has written to all primary schools across the city and county asking them to take part and is calling on parents and guardians to discuss the project with their children and make suggestions.

Mayor of the City and County of Limerick Cllr Daniel Butler said: “I was taken by how passionate Olivia was about Limerick and her drive to ensure that young people have a say in the future of the city and county.”

“It is wonderful that young people are concerned about their localities and we need to ensure that we listen to them and act on their ideas. This project shows how democracy at a very local level works and how, even one child can make a difference.”

Olivia Chan said: “Last year I went to the Children’s Speaking Corner, the theme was ‘If I was the Mayor…’, and I thought of this idea. Children come up with brilliant ideas and they just need a voice and someone to listen to them. And children can think clearer than grown-ups who sometimes over complicate things.”

“I feel really happy and excited to see what all the children of Limerick come up with to make Limerick a better place.”

All ideas will be reviewed and assessed by the Mayor.

Please note: The Ideas Box is anonymous. Children's names are not being requested or collected.

You must fill in details in order to submit your idea. Simply press "Submit" when you are finished.

The closing date has passed and submissions are no longer being accepted.
Scroll to top