Caherconlish is located approximately 10 kilometers (6 miles) southeast of Limerick City.  The village is located just to the south of the main Limerick to Waterford National Primary Road, (N24) providing ease of access to Limerick City, North Cork and the southeast of the Country. The village itself is traversed by the R513 linking the village to Hospital, Ballylanders and onto Mitchelstown in North Cork. The village is sited predominantly on the east side of the River Groody River, which flows in a south-north direction through the village.

According to the 2016 Census, Caherconlish had a population of 1476 persons, representing an increase of 15% on the 2011 population figure of 1279 persons. The 2011 Census indicated a significant population growth rate of +83% on the 2006 population figure of 700. Most of this growth occurred during a strong development phase between 2005 and 2008, however the population again continued to rise, albeit not at the same levels, between the 2011 and 2016 Census. According to Census 2016, the age profile of residents in the settlement of Caherconlish includes a high percentage of children, young people and those at work. The 0-24 age cohort makes up 37% of the population, which is higher than the national average of 33.2%.  The average household size in Caherconlish, identified in the CSO is 3.02, which is relatively high in comparison to an average of 2.62 in Limerick City and a national average of 2.75 persons in 2016.

The 2016 Census recorded the working population to be just below the national average at 51.3% (53% national average).  Unemployment rates are similar to those represented across Limerick in 2016, however rates are slightly higher in Caherconlish (7.4% in Limerick City and County) and 7.08% across the state.

Caherconlish has a median gross household income of €44,426.  This is just below the national median average of €45,256.  In terms of the Pobal Relative Deprivation Index areas, the village is divided into five small area administrative boundaries, two of which are above average, two marginally below average and one considered disadvantaged. Fig 2.1 below provides a socio-economic overview of the village. 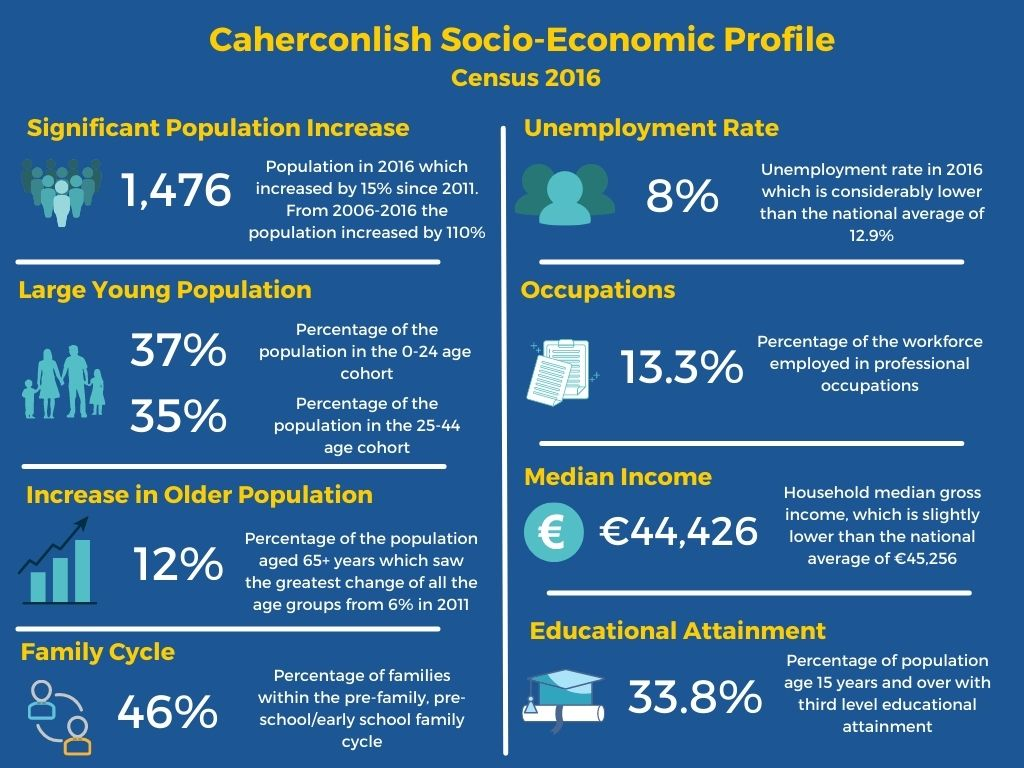 The name ‘Cathair Chinn-Lis’ is interpreted as ‘the stone fort at the head of the lios or earthen fort’, which implies a pre-Norman origin for the settlement. A date of 1199 is given for the commencement of a castle which was held, in 1214, by Theobald Walter le Botiller. Between 1285-7 Cathair-cind-lioss, described as ‘rampart-guarded solid stone’ with vaulted towers and drawbridge, was stormed and burned by Turlough O’Brien. Despite this, the settlement was recorded in 1300 as among the top four assessed for taxation by Edward I in Co. Limerick. The town, at the time, received a murage grant (to build walls) for 20 years in 1358. Caherconlish was described in the 19th century as being once ‘a walled town containing four castles, and an extensive college, the site of which is still called “the College Field”. The four castles may have been fortified town houses, or mural corner towers and/or gates. The town declined in the later middle ages. 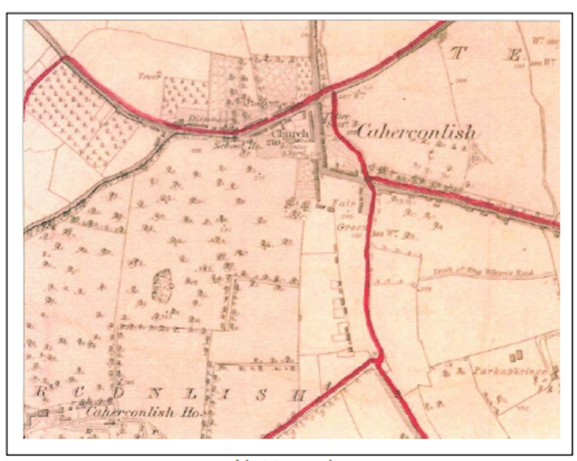 In the 18th Century, Caherconlish profited from its position in the estate of the Wilsons. In 1780, the medieval Church was remodelled complete with a steeple and a distinctive fish-shaped weather vane and even though it is in ruins today is still a prominent feature elevated above the Main Street of the town.

While the core of the early town is centred around the cross-roads, the church and westwards, the most significant change to the town’s layout came in the late 19th century, when the current R513 was extended southwards through the Fair Green to form today’s Square. This in turn, reduced the status of the former main road, now the L-5094 and enabled the town to expand southwards. During the first half of the 20th century, the town expanded northwards along the Limerick road. A new national school was constructed in the 1940’s and a new Catholic Church was established by the 1960’s. In the 2000’s, there was further considerable expansion of the town with several housing developments around the village including Ceol na Habhann, Barrack Close and Cois Rioga and in the village centre with the development of the Millenium Centre. Fig. 2.3 below provides the location of the residential estates in the village in relation to the Local Area Plan Boundary. 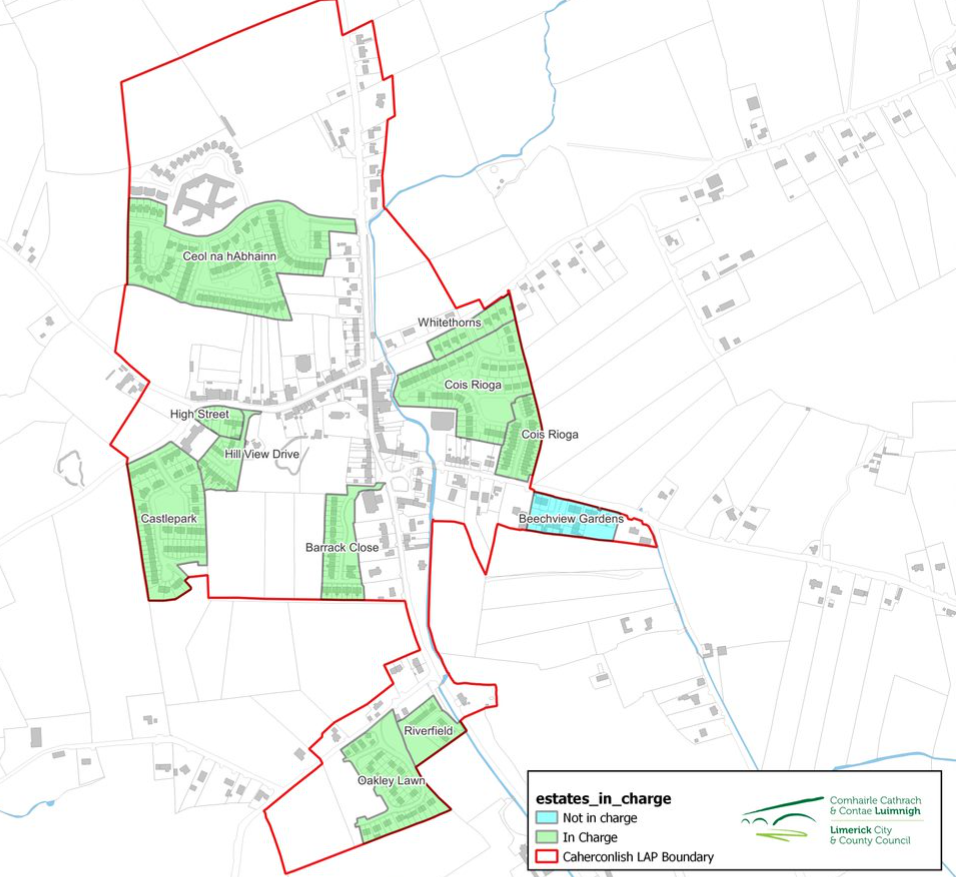 Similar to many Limerick villages and towns, Caherconlish has faced challenges in relation to vacancy, declining vibrancy, transport infrastructure deficiency and enterprise and employment opportunities. This plan seeks to balance the needs of the local community, businesses, land-owners and the environment along with enabling Caherconlish to become an important local driver and self-sufficient village providing a range of functions for its resident population and the surrounding catchment. 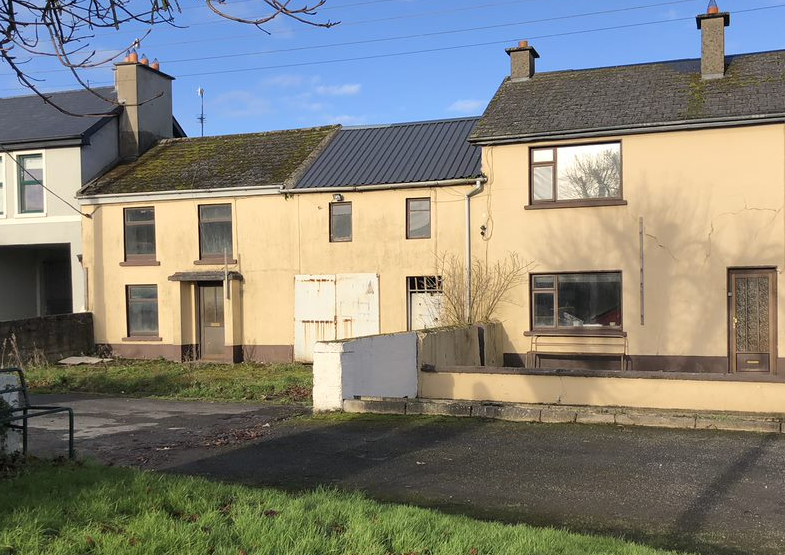 Fig. 2.4 Image of Vacant and Derelict Site in the Village Square

On review of the existing Local Area Plan for Caherconlish, a number of key issues, considerations and challenges were highlighted which have shaped the overall policies and objectives of the Draft Plan.  This has included Caherconlish’s strategic location benefiting from its close proximity to Limerick City and just to the South of the main Limerick to Waterford National Primary Road, (N24). The proximity to Limerick City however has also resulted in a large percentage of commuter travel and an extremely busy road network traversing the village centre creating daily traffic congestion. The recently constructed pathway on the L1149 connecting into the local Creamery Walk is a welcomed additional to the locality however, connectivity to other local community facilities should be supported to ensure alternative options to car usage is facilitated.

Caherconlish has a number of positive characteristics that give a distinctive sense of place, however, the quality of space, particularly in the village centre, is undermined somewhat by a combination of traffic congestion, poor public realm and property vacancy or neglect. In addition, the economy of the village is, predominantly based on the service sector, where services include retail, pubs, restaurants, community and professional services.  Commuting patterns highlight the limited employment opportunities within the settlement with the evident percentage of those travelling outside the settlement for work purposes. 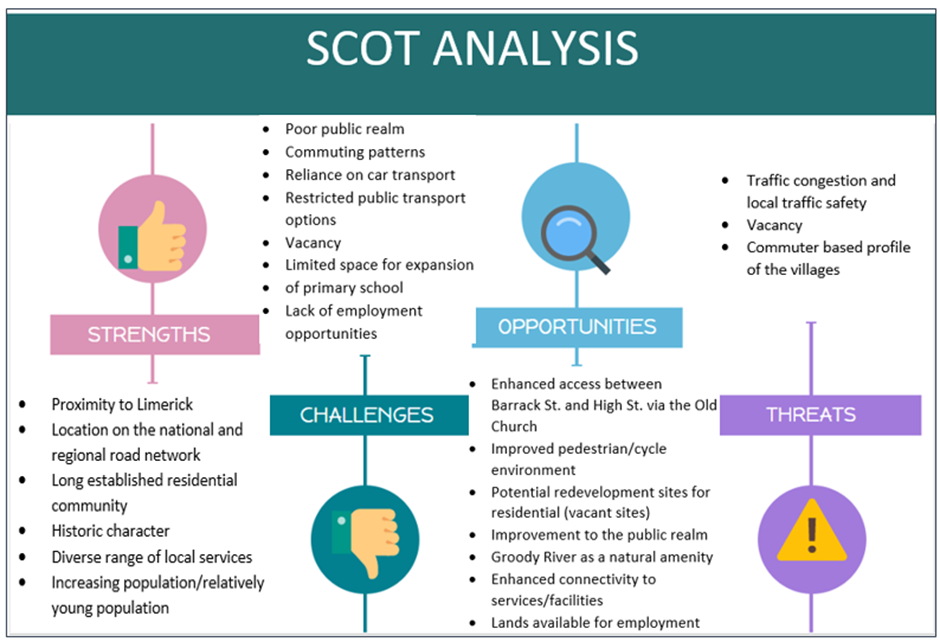