The natural boundaries of the Southern Environs include the Shannon Estuary and the Ballinacurra Creek along the former Limerick City Council boundary line.

The Southern Environs is an area largely urban in nature that has experienced considerable population increase over time. The importance of the Southern Environs to the county and region is reflected in the range and scale of land use in the area, and the provision of important large-scale infrastructural developments including the N18 Limerick Tunnel underneath the River Shannon.

The area accommodates a number of regionally important assets such as the University Hospital Limerick, the Crescent Shopping Centre and Raheen Business Park. 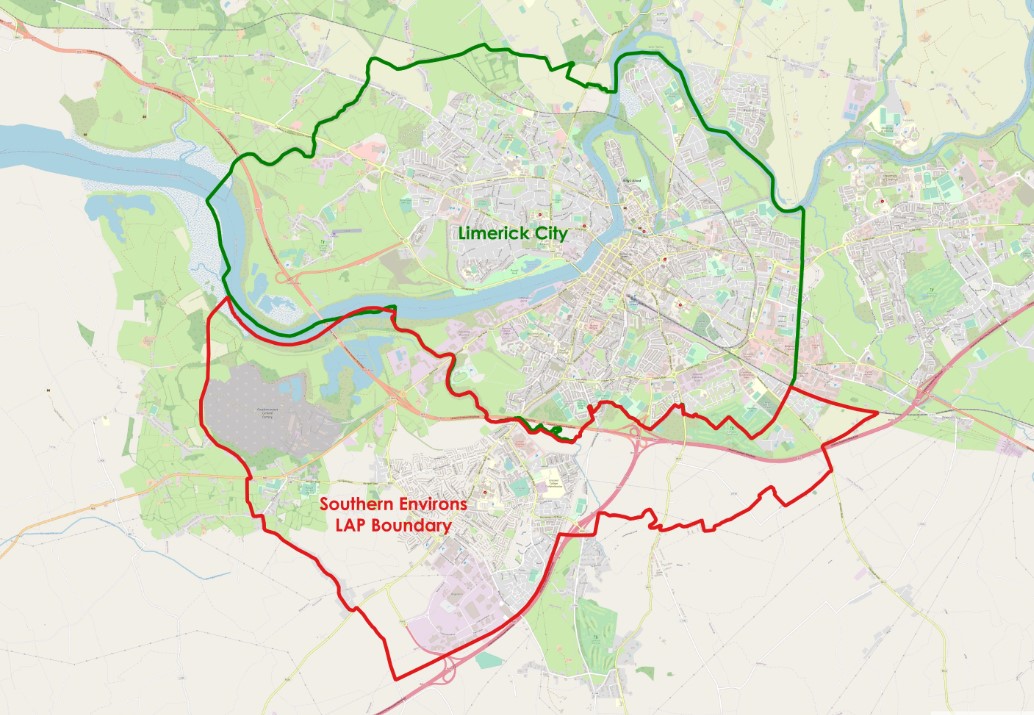 The principal demographic trends for the Southern Environs as set out in CSO Census data are outlined in the following sections.

The slowdown of population growth in the Southern Environs occurred concurrently with a marked reduction in the rate of dwelling construction during the recession following the 2008 economic crash. The area in general continued to grow in population however, but at a slower rate than in the previous inter Census period.

The rural areas of Mungret and Rosbrien-Rathurd are the highest ranking in terms of the importance of older people relative to their populations. However, in terms of the contribution to the overall numbers of older people in the Southern Environs, Dooradoyle is by far the most important. It accounts for 45% of all residents of age 65 and over, whereas it only accounts for 32% of the areas’ population. This reflects the fact that Dooradoyle is the oldest part of the Southern Environs.

These cohorts are significant in terms of the requirements for service provision such as schools and childcare facilities, the provision of housing, health care and employment opportunities.

The Age Dependency Ratio shows the ratio of people aged under 14 years and over 65 years compared to people of working age (15-64 years). The Age Dependency Ratio nationally increased from 49.3% in 2011 to 52.7% in 2016, meaning the number of people who are aged under 15 or over 65 years of age is more than half the number of people who are of working age. Nationally, the main factor in the increase in the total age dependency ratio is the increase of older people. The young dependency ratio only increased by 0.5 points while the old dependency ratio increased by 3.0 points.

Families in the empty nester and retired stages account for 16.6% of all families in the Southern Environs. Transitions in the family cycle will require additional services such as healthcare and options for the downsizing of dwellings.

The principal socio economic trends for the Southern Environs set out in the CSO Census data in the following sections.

Third level or higher qualifications were attained by 44.3% of the Southern Environ’s population, compared to 30% in Limerick City and 33.4% nationally.

In terms of qualifications, the 2016 Census for Southern Environs indicated that 17.9% were qualified in Social Sciences, Business and Law, 12.3% in Engineering, Manufacturing and Construction and 9.47% in Health and Welfare. The remaining qualifications included Education, Services, Arts and Humanities.

The 2016 Census data indicates that 59% of the population of the Southern Environs at age 15 or over were at work, 11.5% were retired, 11.2% were students and 6.8% were unemployed. The working population was above the national average of 53%. The result of the 2016 Census showed the beginnings of a recovery in the labour market among the area’s residents. These statistics indicate that the community in the Southern Environs comprises working households with high employment rates.

In 2016 the Census data indicated that the workforce in the Southern Environs comprised 31% managerial and technical staff, which is the most important class in the study area. In descending order of importance from this are non-manual at 18%, all others ‘gainfully occupied and unknown’ at 14.5%, and then professional workers at 12.3%. The percentage of the workforce accounted for by managers, directors and senior officials is 7.76%.

The 2016 Census data indicated that 22% of the population in the Southern Environs had a birthplace outside of Ireland, representing a diversification of the community. Of the 19,073 persons in the Southern Environs in 2016, 16,578 persons were of Irish nationality, followed by Polish (1,356 persons) and the rest of the world outside the UK and EU (829).