The Draft Local Area Plan for the Southern Environs is underpinned by a strategic vision intended to guide the sustainable future growth of the area. The objectives outlined below combine to form a coherent development strategy to 2027 and beyond. These goals cover economic, social and environmental dimensions.

The strategic vision recognises the potential of the Southern Environs to align with the key growth objectives set out in higher order spatial plans and to take advantage of the strategic location of the environs. Delivering on these objectives will result in an enhanced quality of life for all citizens. The Draft LAP and overall vision is underpinned by a number of interlinked strategic objectives that will be realised through the chapters of the plan.

“To fulfil the role of the Southern Environs, by providing for low carbon, sustainable and consolidated growth in a coherent spatial manner, protecting and maximising opportunities presented by the unique natural and built environment for green and public modes of transport, recreation and employment opportunities, while delivering an exemplar quality of life for all”. 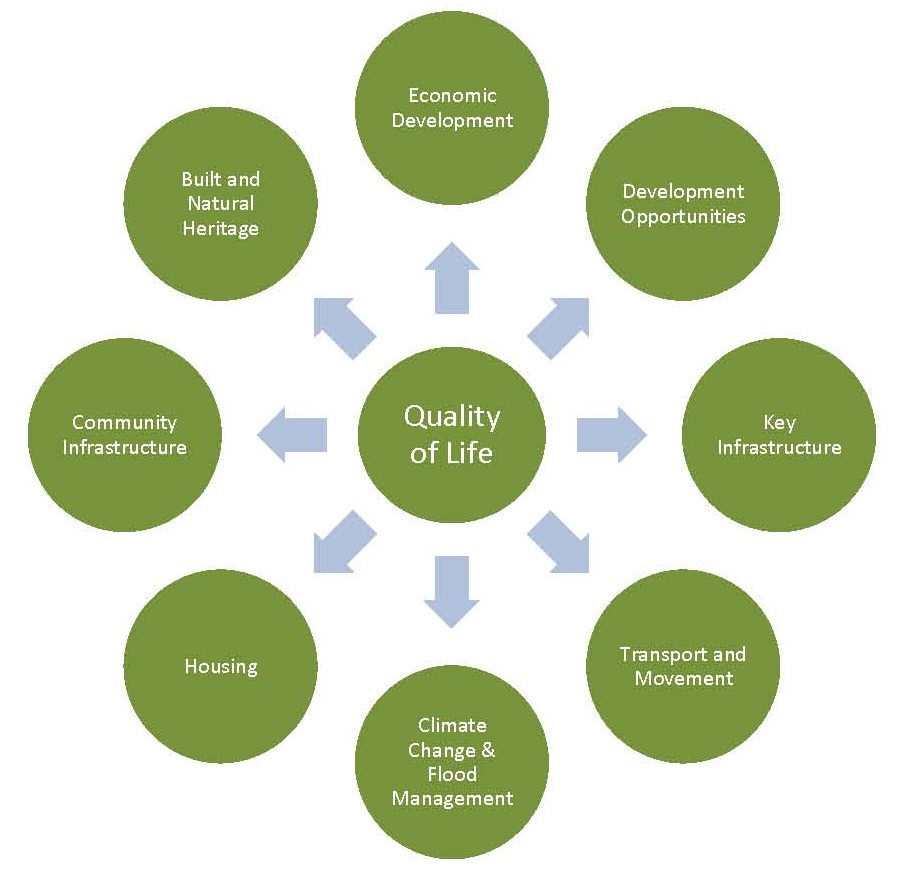 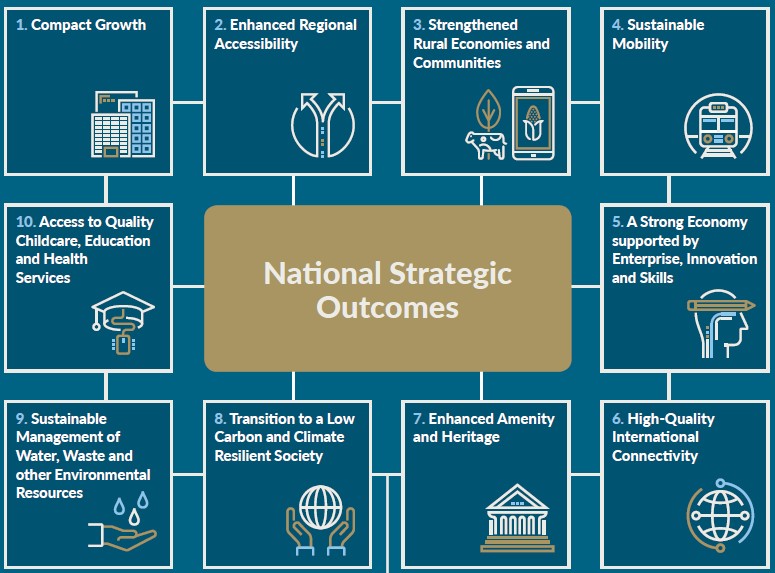 The Strategic Vision for the Southern Environs is consistent with the Tier 1 Settlement designation under the Limerick County Development Plan 2010- 2016 (as extended) and is supported by the NPF and RSES. The Southern Environs has the ability to achieve the National Strategic Outcomes as briefly outlined below:

Strategic location within the Limerick Shannon Metropolitan Area and proximity to Limerick City Centre, with opportunities for consolidation, regeneration and development of infill and brownfield sites.

Ability to promote the use of sustainable transport modes, including walking, cycling and public transport to the city centre, railway station, employment zones and third level education campuses.

Ability to build on the existing presence of multinational companies in Strategic Employment Zones, such as Raheen Business Park and University Hospital Limerick, and the proximity to third level education providers, including University of Limerick, Limerick Institute of Technology and Mary Immaculate College.

Ability to enhance existing and provide new community, sports and recreation facilities such as at Mungret Park.  Maintaining and protecting the rich built and natural heritage found throughout the Southern Environs.

Ability to deliver a strategy for the growth of the Environs to cater for sustainable employment and residential growth in tandem with the provision of hard and soft infrastructure. This Local Area Plan will include policy support for the provision of adequate amenities and open space, infrastructure and maintenance in a climate altered future.

Availability of, and policy support for expansion of existing and provision of new childcare, schools and healthcare services, such as at University Hospital Limerick.

This Draft Local Area Plan is based on a number of general objectives designed to improve the quality of life of the citizens of the environs, which the Council will endeavour to implement during the lifetime of the plan. The development of the Southern Environs over the lifetime of this plan focuses on sustainable growth of the built environment, employment generation, and the provision of community and social services together in a low carbon, compact, consolidated and connected pattern of development.

The following are the interlinked strategic objectives in relation to the delivery of the Strategy:

The Core Strategy for County Limerick is set out under Chapter 2 of the Limerick County Development Plan 2010 – 2016 (as extended). Section 19 (2) of the Planning and Development Act 2000 (as amended) requires that:

“A Local Area Plan shall be consistent with the objectives of the Development Plan, its Core Strategy, and any Regional Spatial and Economic Strategy that apply to the area of the plan...”

The National Planning Framework (NPF) is a long-term strategy which sets out broad national, regional and city specific population targets to secure more effective regional development. To facilitate monitoring and review, phased regional population targets to 2026 and 2031 are set out in both the NPF and the Regional Spatial and Economic Strategy for the Southern Region (RSES). The NPF supports ambitious growth targets to enable Limerick City to grow by at least 50% to 2040 and to achieve its potential to become a city of scale.

The growth of the Southern Environs can be achieved in a sustainable manner through the objectives of this plan, having cognisance to the following:

To ensure compliance with the Core Strategy and associated population targets for the Southern Environs, it is an objective of the Planning Authority to monitor the number of residential units permitted and developed annually.

Economic development underpins all chapters in this Draft Local Area Plan. The aim of the plan is to capitalise on the Southern Environs’ location on the motorway and regional road networks, while providing a complimentary role to Limerick City.

The Local Area Plan seeks to compliment the role of Limerick City Centre at the top of the retail hierarchy. Any proposals for retail development will be assessed in accordance with the provisions of the Joint Retail Strategy pending the completion of the new Limerick Shannon Metropolitan Retail Strategy.

Future development proposals are contingent on key infrastructure. Capacity is currently available in the Foul Sewer Network, Waste Water Treatment Plant and Public Water Supply. In the short to medium term, the Mungret Link Street will be delivered and will open up lands for development. This plan includes objectives for the delivery of networks for cycling and public transport.

The environmental sensitivities of the area identified in the SEA process have informed the Core Strategy and the role it identifies for the Southern Environs. The Draft LAP responds to environmental factors, including climate change and areas at risk of flooding etc. It also acknowledges the importance of built and natural heritage as an environmental and economic resource and includes significant objectives for its conservation and enhancement

The Southern Environs had a population of 19,073 persons in 2016, representing an increase of 5% on the 2011 population figure of 18,092 persons. As previously stated, in the absence of the adoption of the proposed Limerick Development Plan, the Local Authority has made assumptions with respect to population projections and allocation, additional residential units and zoned land requirements in accordance with the NPF, the Implementation Roadmap for the NPF and the RSES. In this respect, the assumed Southern Environs population growth allocation is an additional 7,420 persons to 2027. This equates to a projected requirement for an additional 2,968 residential units over the period up to 2027, based on 2.5 persons per household. These figures include headroom of 25% for the interim projection to 2026, permissible in Limerick under the Implementation Roadmap for the NPF.

Given the Southern Environs’ function within Limerick City and Suburbs, it is anticipated that the Southern Environs will attract social and administrative functions as well as economic activity, and will act as a focus for future population growth in accordance with the objectives of the NPF and RSES.

The Southern Environs has the foundations to sustain population growth in accordance with the principles of the National Strategic Outcomes of the NPF, having regard to the location within Limerick City and suburbs, connectivity to the motorway network, the availability of public transport, serviced land and a range of existing amenities, education, childcare and healthcare services and employment zones. On this basis, the assumed scale of growth for the Southern Environs is considered reasonable and will be progressed on lands including opportunity, infill and brownfield sites.

The National Planning Framework requires that 50% of all new housing within Limerick City occurs within the existing city and suburbs footprint. As outlined under Section 5.4 above, approximately 2,968 residential units are required over the period 2016 to 2027 in the Southern Environs.

At time of writing, approximately 240 residential units have been built in the Southern Environs since 2016 and 54 units were vacant. This equates to a requirement for the construction of an additional 2,674 units to 2027.

The residential capacity of the lands identified is approximately 3,430 units as indicated in the table below. Given the role of the Southern Environs in the Limerick Shannon Metropolitan Area, the number of education and community facilities, and the availability of lands for employment uses, it is considered that there is sufficient land zoned. The lands for residential development have been identified with cognisance to the necessity for future proofing of this suburb beyond the plan period, in order to facilitate the role of Limerick City as a Regional City in accordance with the objectives of the NPF and MASP.

Note: The density and number of residential units permissible will be determined at planning application stage, subject to compliance with the density requirements of Section 7.3 of this LAP, the applicable Development Management Standards and Section 28 Guidance etc.

Table 2 Land Capacity Assessment above sets out an estimation of residential units which can potentially be delivered in the Southern Environs, in a consolidated manner consistent with the provision of infrastructure including water services, public transport, education, open space and amenities.

A Serviced Land Assessment Matrix (SLAM) accessing the key infrastructure available to the individual sites identified as suitable for the provision of residential development has been set out in Appendix II. The SLAM identifies the infrastructure necessary to support future development. An indicative timeframe for the delivery of critical infrastructure i.e. short, medium or long term is included.

CS P1:   To ensure compliance with the Core Strategy (or any revision thereof), the Planning Authority  shall monitor the type of developments permitted, including the number of residential units  constructed on an annual basis.